News Articles About The Church 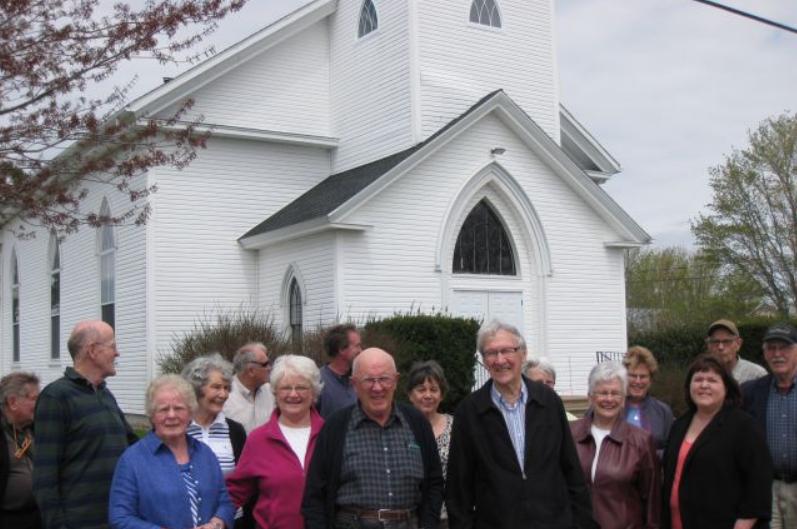 Last week, the place of worship known as the “church in the orchard,” was purchased by a faithful group. “Twenty-two people wrote cheques,” said Glenn Ells, of those wanting the Canard church to continue. A year of waiting patiently, the help of a generous American and much organizing preceded the sale of the building made surplus by an amalgamation of congregations.

Signing the papers “was exhilarating,” Ells said May 15, “but it’s been a long year.” According to Ells, the U.S. donor has a heart of gold and was determined the church should not be used to house farm workers “This is a happy day,” said Linda O’Neil of Medford. “It feels right,” Alison Petrie of Kentville added. Others who gathered outside the building last week to mark the occasion came from North Alton and Wolfville.

Church change began to roll out with the sale of the United Church in Canning, which merged with Canard four years ago. Five local churches then amalgamated into Orchard Valley Pastoral Charge in July of 2012. The United Church in Kingsport has remained independent. When six church properties in eastern Kings County went up for sale in March 2013, an outgrowth of one congregation was already meeting for worship. That group, whom Ells laughingly refers to as the “outlaws,” purchased the over 150-year-old church.

For now Trinity United Church in Upper Canard will be known as the Canard Community Church when its doors open to all on the last Sunday of this month. According to Ells, he and the others have more than doubled their numbers while worshipping in the Sheffield Mills Community Centre. Dr. Robert Wallace of Wolfville has been leading their services. Ary Kalkman said bringing the congregation closer to town might add to the 40 people already attending, but Mary Larkin said this past winter’s storms did not deter many. “We will have a happy welcome for all,” said Christina Swetnam, who serves as secretary. Ken McRae of Kentville emphasized the community-building process in the purchase. “I want to be quite distinct, this is a wide-ranging group, strong and vibrant, and I hope we will continue to build.” McRae noted country churches generally have had some hard knocks in recent years. “To survive you need focus and presence and that needs to continue here,” he said. The Canard church was built in 1848 on donated land and underwent extensive renovations about 10 years ago. 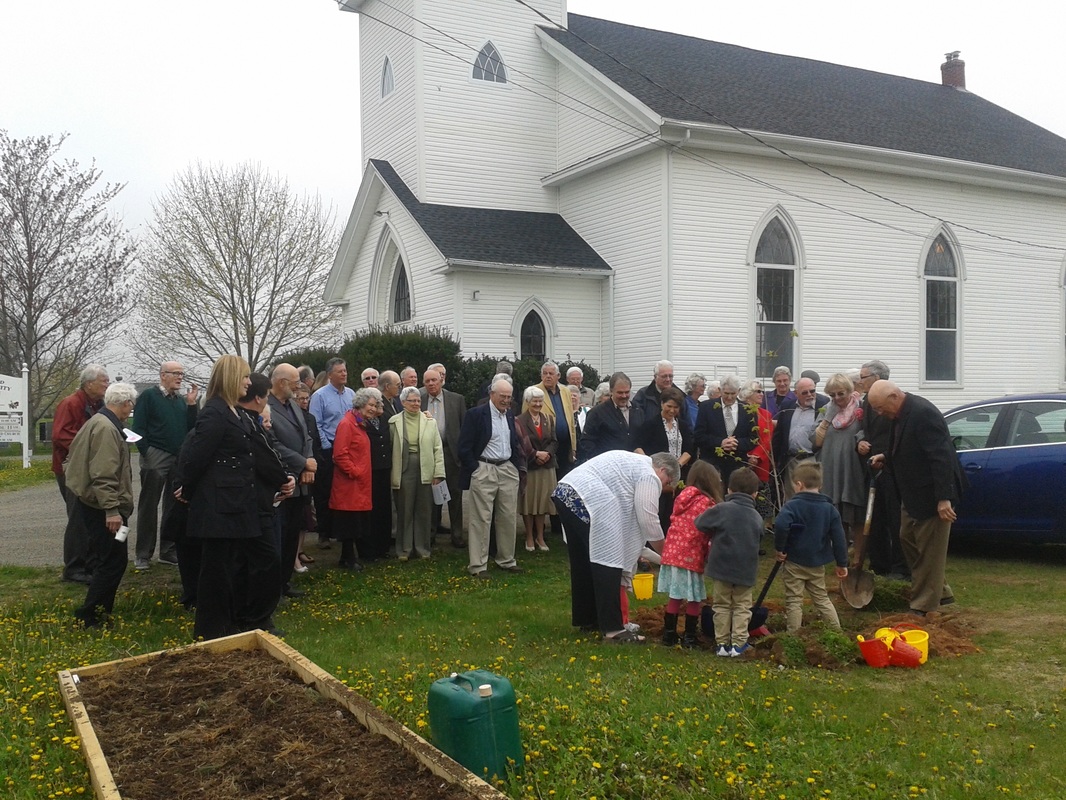 ​Canard Community Church is flourishing
May 2016 - Written by Wendy Elliott

​Two years ago, 22 people took a risk. On May 15, they gathered to plant a tree and acknowledge the gamble is paying off. In 2014, members of the Canard Community Church wrote cheques and purchased the former Trinity United Church in Upper Canard. Then the congregation began growing. Glenn Ells says numbers have grown from an average of 20 to closer to 50 on Sunday mornings. Now the sanctuary is being shared each week with the Christian Reformed Church of Kentville.

Rev. Bert Vanderbeek and his congregation began holding services in Canard back in January after selling their church building to a local developer. “We’re both happy,” says Ells. “We’re enjoying our independence and freedom. We’ve dropped our indebtedness.”

Dr. Robert Wallace continues to lead services and he blessed the sugar maple sapling. It is paired with a red maple planted in 2008 on the 150th anniversary of the church.
“We planned our tree planting between the two services so that both congregations could attend,” Ells said “The congregation is starting to realize what a community church can be because we’re not tied to the oversight of any denomination. We can handle it,” he said. Ells says the church supports area community groups and the church hall is used by high school students from nearby Canning for fundraising dinners. A community garden is likely to take off this summer, he added.

Information About Giving
And Tithing During Covid-19